The complete works of Douglas Weiland are held in the Schusterwerkstatt at the
Brahms Museum, Mürzzuschlag, Austria. 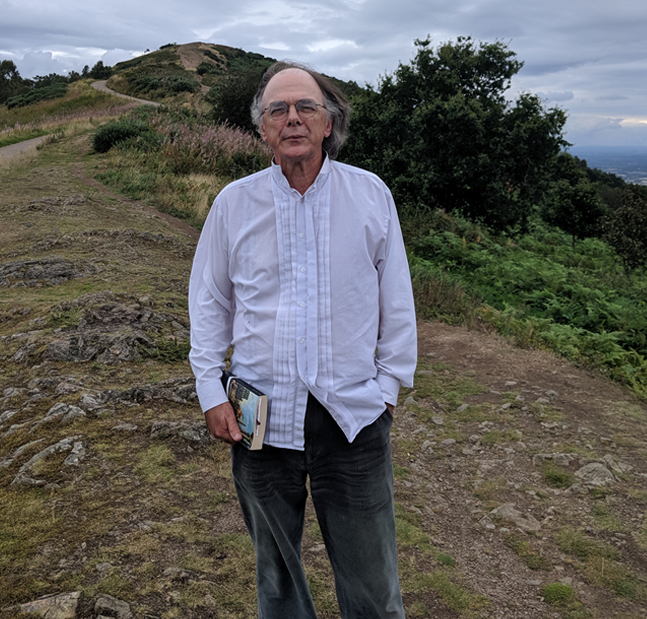 Weiland’s output comprises fifteen motets, three masses, three symphonic scale concertos, a symphony, a concerto for violin and strings, eight string quartets nos.1,3,4,5,6,7,8,9, a piano quartet, four quintets, two piano trios, a string trio, three violin and piano sonatas, an octet, a divertimento for strings, an organ prelude and fugue, three solo cello suites, cantatas, anthems, songs, other instrumental, orchestral, choral and choral orchestral works. Up until 1990 he had performed as a violinist. From April 1990 to the present day his sole professional occupation has been that of a full-time composer. From 2021 Douglas will conduct his own works.

Douglas's first substantial achievements were in the form of three major chamber works (Voice Quintet, First Quartet, Piano Quintet) written for the ensemble of which he was a founder member, William Hennessy’s Australian Quartet (ASQ) together with Keith Crellin (va) and Janis Laurs (vc); these works were composed between 1985 – 88. The Voice Quintet was premièred at the 1986 Adelaide International Festival, with the composer’s wife, Hilary Weiland, mezzo; the First Quartet the ASQ toured to countless première concert halls around the world; the Piano Quintet was performed and recorded by the Australian Quartet, with the great English pianist and life-long friend Marie-Noëlle Kendall to whom the work is dedicated, during the years following Douglas’s departure from the ensemble.

Weiland’s music has benefited from the extraordinary champion of it, that is William Hennessy. Much success and achievement over the past three and a half decades has been due in some degree or other to the work of this great artist and musician.

The Divertimento for Strings received its World Première on the Academy of St Martin-in-the-Fields 1993 Tour of the Far East with performances in Manila and at the Victoria Hall Singapore, followed shortly by their London Première at Queen Elizabeth Hall. Further performances by the Academy took place on their 1994 North America Tour; all were directed by Kenneth Sillito. Of William Hennessy’s performances of the work, that given with the students of Melbourne University is held in the ABC permanent archives.

One of Weiland’s priceless miniatures, the motet “H. Baptisme (II)” (George Herbert), first heard at London’s Temple Church in 1992, was performed at Trinity College Chapel at the college’s George Herbert Celebration in March 1993, the Choir of Trinity College Cambridge conducted by the late Dr. Richard Marlow. In October of that year Ronald Corp conducted the New London Children’s Choir at St James’s Piccadilly in the première of “Huge Griffons” (Edward Stirling Booth), a piece commissioned by Corp for the choir through the RVW Trust.

At the centre-middle of his chamber music output are two large-scale sister works:

Of his Three Sonatas for Violin & Pianoforte, Ops. 26,28,29, the First (1999) was written in memory of Gracia Lezama. Douglas, in an excursion out of ‘performing retirement’, made archival recordings of Ops. 26 & 28 with Marie-Noëlle Kendall. Well-known English violinist and brother-in-law of Gracia Lezama, Peter Thomas, gave the World Première of the First Sonata with pianist Philip Fisher in a recital at Birmingham University’s Barber Institute of Fine Arts in 2000.

On November 19 2009 Sir Neville Marriner conducted the landmark World Première of his Clarinet Concerto Op.30 (2002)* with Andrew Marriner and the Melbourne Chamber Orchestra at the Melbourne Recital Centre. There followed in 2013 a second MCO/MRC performance of the work given by Australian virtuoso clarinettist David Griffiths.

In 2009 Douglas Weiland fulfilled the 2001 Leonard Smith Legacy Commission (London). “Composed during three weeks of October 2009, Concerto 290 in A min for violin and strings was conceived and born out of a life-time’s marvelling at the Bach Violin Concertos, written around 1720; 290 years ago.” The Concerto was premièred the following year by William Hennessy and the Melbourne Chamber Orchestra conducted by Michael Dahlenburg as part of their 2010 Regional Tour of Victoria.

Contained amongst Weiland’s recent body of work are some of his most substantial statements. The collaboration with poet, Gary Simons, resulted in a set of three unaccompanied double choir motets for Norwich Cathedral. Many years earlier, in May 2009 David Lowe directed there a performance of the motet “Vere Dominus Est”, commissioned by Christopher and Judith Lawrence. His Fourth & Fifth Quartets were written in support of the establishment of a new composition chair in Melbourne. In August 2014 Douglas Weiland completed a dynamic large-scale Flute Concerto (Op.48) for the legendary British flautist, Susan Milan.

In his 2014 Grawemeyer Award USA Nomination,* London publisher Roy Mowatt wrote of the Op.50 Fourth Quartet: “This work is one of a number of masterpieces written in the last ten years, culminating in the Clarinet Concerto and Fourth and Fifth Quartets”.

Other recent compositions include the Op.55 Octet, commissioned and premiered by William Hennessy; Missa Brevis written in memory of Dr. Zaouré Schuster, born in Almaty, Kazakhstan, May 3 1953, who passed away in Vienna, November 9 2015; Westmorland Mass, the introduction of which into English Cathedral/College life began with a performance of the Agnus Dei given by Stephen Layton and Choir of Trinity College Cambridge at Trinity College Chapel on May 23 2017.

A uniquely memorable event took place on Good Friday 2018 at St Peter’s Church, Westleton, Suffolk . Douglas’s collaboration with Professor Tina Beattie resulted in the first performance of ‘Twelve Words’ (Op.43 2008) (String Trio & Speaker) – a revelation in music of Christ’s words “from and beyond the Cross”, following in the tradition of Haydn’s ‘Seven Last Words from the Cross’. In a magical performance given by Kenneth Sillito (vn), with Michael Dolan (va) & Michael Hurwitz (vc), Tina Beattie’s majestic delivery of her splendid Script was the culmination of a treasured several months’ collaboration on the project.

In April 2020 the first commercially available ‘Weiland’ CD was released on the Naxos label*. This is Melbourne Quartet’s exemplary performance of his Fourth & Fifth Quartets (Ops. 50/51).

To his extraordinary wife, Hilary, Douglas has either written or dedicated numerous works, including the immaterial and inspired miniature “The Lord’s Prayer”, a gift for her at their wedding in Bowness-on-Windermere in 1982; and a small-scale Magnificat & Nunc Dimittis written in celebration of the birth of their son thirteen years later.

May 2019 saw the completion of the Op.59 Requiem Mass (N&NMC Commission sponsored G. Simons, Sept. 2018). Interlaced amongst the selected orthodox Latin texts are four new Simons poems in English. To three have been assigned the musical device of the Chorale that Bach iconically fashioned in his Passions. Not only for purely momentary reflection, in the Requiem the chorale represents more a stepping aside to consider the familiar lines through rays of a new and fresh perspective. This is especially powerful in the placement of Chorale I. The Gary Simons poems bring elegant simplicity, integrity and profound spiritual focus that, in the context of the requiem, heighten, rather than diminish, the theology of the mass.

For performance, publication and commission details regarding works mentioned in the biography, see under Catalogue